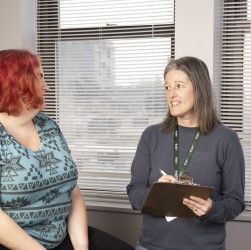 Last summer, Haymarket was awarded a grant from the Substance Abuse and Mental Health Services Administration (SAMHSA) to fund its efforts to combat the opioid epidemic in the Chicagoland area. The crisis is ongoing, and its severity hasn’t relented, but with the help of SAMHSA, Haymarket has responded in full force with its Comprehensive Opioid Recovery Center (CORC) project.

CORC extends lifesaving resources and treatments across Cook and DuPage counties by working with medical facilities and drug courts to provide treatment and individualized recovery approaches. Crucially, CORC also includes outreach services to “hotspots” of homelessness in the region that it serves, serving a population that has suffered extensively from the crisis with little to no support.

Results from the project are already showing promise. While demand for the program has been higher than anticipated, data has shown that 70% of participants in the project have abstained from substance use six months after intake. Additionally, the financial stability and employment of participants after six months have risen significantly, multiplying four and five-fold, respectively. The crisis remains an ongoing threat to vulnerable populations, but Haymarket’s services are having an impact for those in need of support.