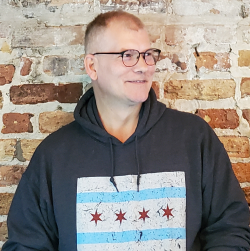 Casey’s first experience with drugs came at the age of five, with the misuse of over-the-counter medicine. Over time, Casey began excessively drinking, smoking marijuana, and later on, cocaine and meth. Casey’s problems with substance use eventually led him to losing his home and falling into profound despair. “When I was at my lowest point, I asked my dealer to overdose me. I just didn’t want to be alive anymore.”

Thanks to the help of a friend, Casey came to Haymarket Center for recovery. There he met June Davis, his recovery coach.

“When I met Ms. Davis for the first time, she just let me sit in her office and cry. I didn’t have a chance to release like that before.”

Casey’s recovery journey did not follow a straight and steady path. There were struggles, relapses, and reentries into Haymarket. During his second time in recovery, he decided to change his approach. When he admittedly rushed through his recovery the first time, Casey decided that instead he would take his time, listen more closely to his peers and counselors, and approach his time at Haymarket with a mindset for growth.

“When I allowed myself to heal, I was able to see what an amazing place Haymarket is,” Casey explained. “Haymarket was the place that opened the door and said, “you are worthy,” and I’m so thankful for that.”

Today, Casey lives a happy, healthy life on the north side of Chicago and has enjoyed four years of employment at Lou Malnati’s. He recommends ordering the deep-dish Lou’s pizza with sausage when you visit.